This exercise brings together 27 JTAC teams totalling 150 soldiers from 17 Allied and Partnership for Peace nations  with the objective to train their JTACs, aircrew and commanders in a range of  realistic, complex and demanding scenarios both in reconnaissance and ground support .

The joint tactical training will take place in the military facilities in Boletice, Bechyne, south Bohemia, Namest nad Oslavou and Libava within the Czech Republic

The exercise is planned to run from 5th September to 20th September 2016 with The majority of participating aircraft being based  in Namest nad Oslavou, Caslav, central Bohemia, and Pardubice, east Bohemia, in the Czech Republic and from one base each Britain, Germany and Hungary

The helicopters taking part will be taking off from the military air training grounds in Libava, north Moravia, and Boletice, south Bohemia. 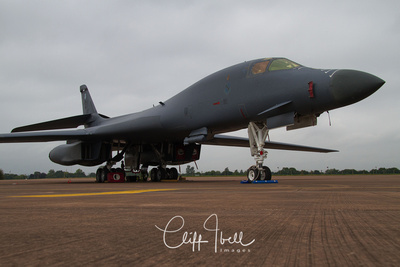 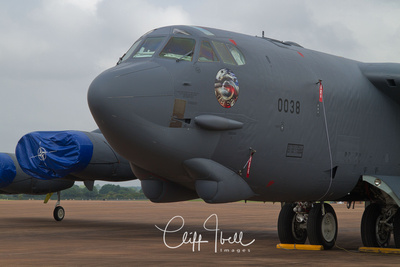 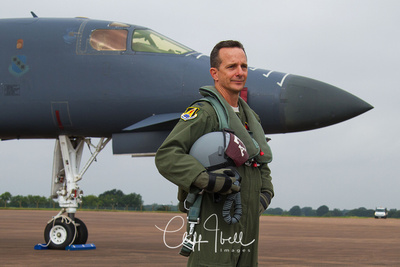 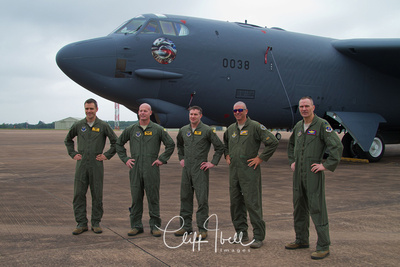 For the duration of AMSE16 the three strategic bombers are operating out of RAF Fairford Gloucestershire UK with the B52H 60-0038/BD callsign “SCALP99” arriving 30th August followed by the pair of B1B Lancer 85-0089/DY callsign Crook1 (The Commanders aircraft) and 86-0127/DY callsign Crook2 on 3rd September.

Following a sighting sortie on 4th September to familiarise crews with both the transit routes and exercise area AMSE16 sorties commenced on the 5th September with one 5hr mission flown each day by single aircraft.

Col Denis Heinz was asked about the missions being under taken, he told us: “ It's a 1hr30min flight to the training area in the Czech Republic where we have been engaging with the Forward Air Controllers and Joint Terminal Attack Controllers from 18 different nations dropping simulated weapons on targets for 2hrs before returning to Fairford, phenomenal training the controllers have been very good" 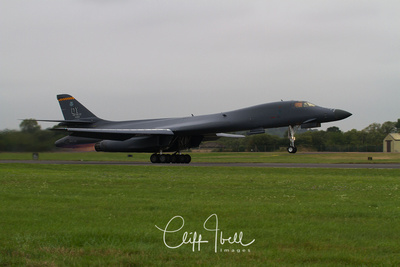 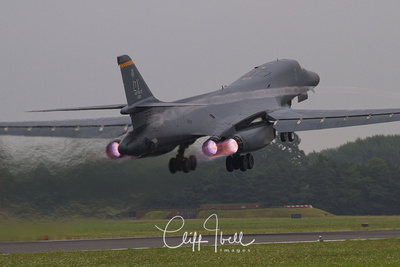 why use RAF Fairford as a forward operating base rather than a base on mainland Europe?

Are all the missions’ pre-planned targets?

Bresnahan  “We have been planning our participation for about 6 months and the missions are pre-planned however: it is a fluid situation with JTAC giving us changes and new target information when we arrive on station.”

The USAF rules of engagement are different to the other participating countries has this caused problems for you?

Bresnahan “Not at all as we have liaised with the other nations beforehand to ensure we all understand each other’s operating procedures.”

So why are the Boeing B1B's taking part as well as the B52H?

Heinz ” The B1B are crewed by reservists as well as full time crews from the 489th BG this gives them deployment experience, also that the aircraft deployed are both B1B Lancers that have been upgraded to Block 16 specification so a good test of the Block 16 upgrades.” 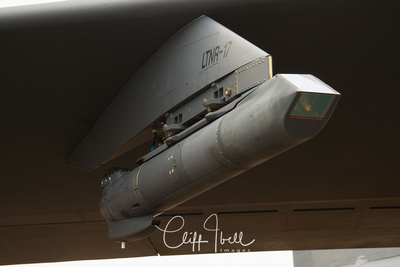 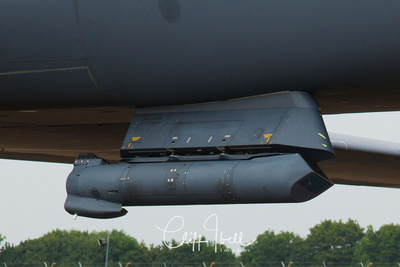 The Sniper ATP fitted to both the B1B and B52H provides precision targeting and non-traditional intelligence, surveillance and reconnaissance (NTISR) mission capability. These pods fitted to the B1B and B52H are ideally suited to the missions flown in support of AMSE16 as they give the crews and JTAC better precision when identifying and targeting enemy threats.

So as well as the Sniper and FIDL upgrades how does the B1B maintain its position with the accuracy needed for JTAC support missions?

Another modification to the B1B Lancer are the airflow intake splitter plates fitted to the F101-GE-102 turbofan engines. It was discovered that the original splitter plates significantly increased the B1B’s radar signature so they were redesigned by Boeing however; there is a trade-off between the reduction in the aircrafts radar signature and the reduction in maximum speed attainable. 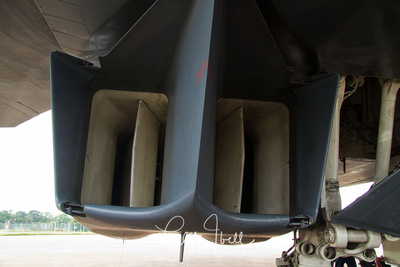 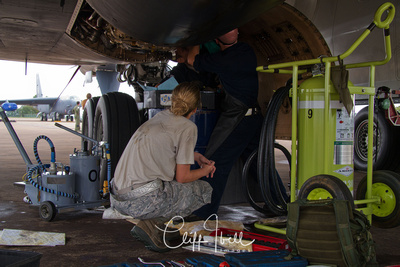 These continued upgrades are expected to increase the service life of the B1B up to the year 2040.

As well as aircrew the detachment is supported by maintainers and armourers who will service and repair the aircraft. This proved vital as soon into the deployment one of the B1B went unserviceable but was repaired and test flown within two days. One of the maintainers explained that one of the problems they have with both the B1B and B52H is one of spare part acquisition since the airframes are so old. At times this has necessitated in orders placed with DoD approved suppliers to reverse engineer original Boeing (Rockwell) parts.

Cliff Ibell Images would like to thank Col Denis Heinz and his staff from 489th  Bomb Group  USAF, 501st Combat Support Wing (501 CSW) USAF and OC RAF Fairford in the making of this article. Also a special thanks to Lt Monique Roux and Staff Sgt Nicholas Filip for setting me straight!