The 14th September 2016 saw a very unique formation leave RAF Odiham on a navigational exercise taking in a large part of Southern England.  The formation, callsign ‘WOKKA‘, consisted of three Boeing CH47 Chinook Mk4 accompanied by an AgustaWestland Lynx AH9A. It was unique as the Chinooks all carried centenary markings, namely for 18(B) Sqn, 27 Sqn and 28 Sqn; all designed by the same artist, Flt Lt Andy Donovan.

The sortie was the culmination of two years’ work which saw Donovan being commissioned to create these colour schemes and apply them to the airframes ready for each Squadrons’ centenary celebration parade. Long gone are the days when the Commanding Officer would say to a couple of airmen “Here’s some paint, go decorate that airframe.” Today there are processes that have to be followed and permissions sought before any paint is applied! 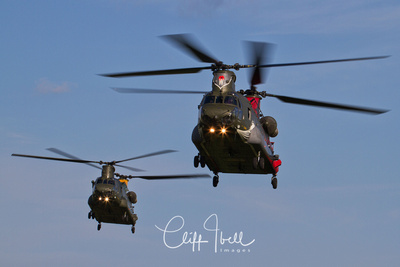 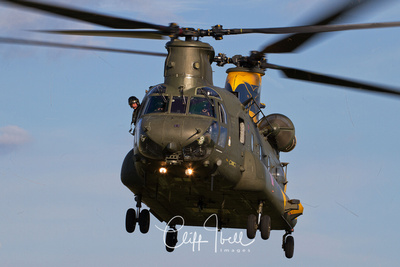 The first airframe to receive treatment was destined for 18(B) Sqn. This was Donovan’s first design and planning started in November 2014. His brief was to tell the story of 18(B) Sqn in its paintwork, which was in itself a challenge. However, putting a commemorative colour scheme on a Chinook had not been done in 25 years so no records existed of how to achieve such an enormous project under modern day regulations. Once Donovan had come up with a design that the Squadron was happy with, the long process of getting acceptance from the authorities within the MOD and the manufacturer began. 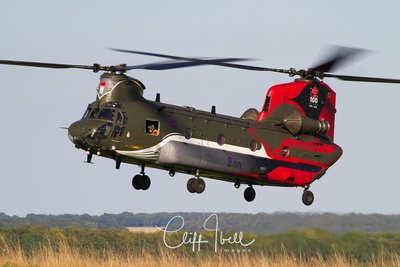 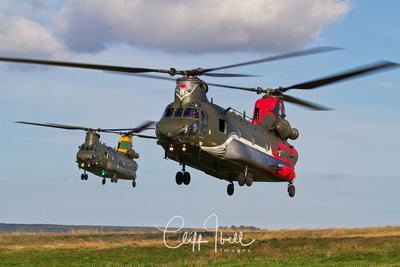 The first problem came in gaining the engineering authorisation. Every airframe has stencil markings denoting instructions such as ‘NO STEP’ or annotating refuelling points. Some of these marking can be moved slightly and others cannot. For example, you cannot move a ‘NO STEP’ stencil to stop it spoiling the design only to have the airframe damaged by maintainers as a result. Likewise the colours of some of the stencils and markings can’t be changed as they are NATO specific, such as the national insignia.  Therefore, all changes to the standard schemes have to be justified and approved.

Another engineering consideration is the airframe itself; some panels can be painted and some were placed out of bounds to the project by the engineering authority so as to avoid ruining the scheme if they had to be replaced during its life. Once Boeing and the RAF engineering authority had approved the paint scheme from a technical standpoint the next step was to gain permission from the MOD’s Camouflage Working Group (CWG).

The CWG look at the proposals and the paint types to be used. A variety of colours already exist for use on each particular aircraft type so this limits the palette available to the design as getting new colours manufactured to the right specification is costly in terms of both time and money.  The paints themselves have to be chemically compliant with the airframe and its undercoat, having low infrared (LIR) properties, despite the resulting colour scheme being more visible in the end. Once passed by the CWG, then came the logistics of securing sufficient paint stocks, time in the paint shop and more importantly an airframe! 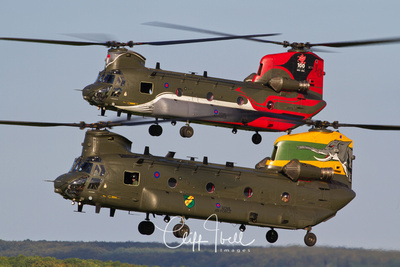 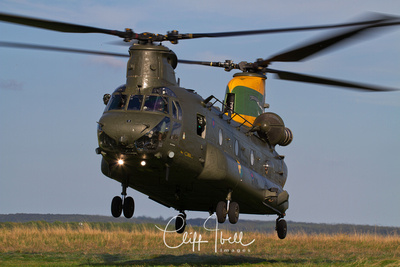 At the time, the RAF’s Chinook fleet were heavily committed to both Operation ‘HERRICK’ and subsequently  ‘TORAL’ in Afghanistan so this put a lot of pressure on engineering maintainers and managers at Odiham to keep airframes available to support those operations. Finding a suitable airframe required it to meet certain criteria in as much as they had to be less suited for deployment and ideally scheduled for depth maintenance within 12-18 months in order to have the schemes removed as part of normal airframe life cycles.

Once identified, a two-week time slot was allocated in the Odiham paint shop and ZA712 was placed into the hands of James Littlejohn of SERCO and his team. The design was then masked off by hand and the paints applied. ZA712 now known as ‘Poppy’ to her friends was finally ready in time for 18(B) Sqn’s Centenary parade in May 2015. 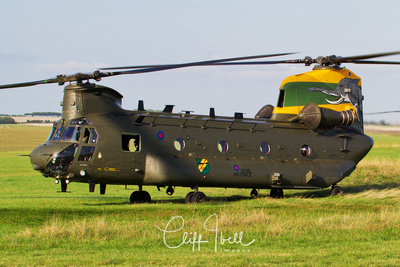 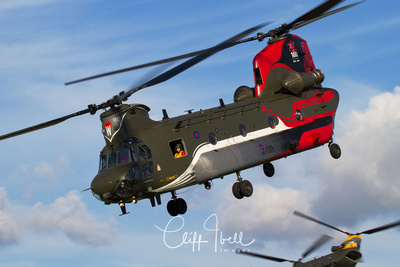 The second special was for 27 Sqn. This was more of a last minute task for Donovan. 27 Sqn had always wanted a special colour scheme to celebrate their centenary but due to operational pressures were originally limited to decals which could be easily removed should the aircraft need to be deployed rapidly. However, six weeks prior to the centenary parade, due to be held in November 2015, Donovan was approached by 27 Sqn to design something more elaborate having achieved much more with the 18(B) centenary scheme. Despite operational pressures on 27 Sqn and Donovan himself, he and a small team from the Squadron managed to design and produce the aircraft in just 6 weeks with full approvals in place (including two weeks in the paint shop with Littlejohn and the SERCO team). ZA683 now christened ’Nellie’, was ready for the centenary parade.

The third and final Chinook centenary scheme was for 28 Sqn and work began in January 2016. It was decided to concentrate on the Squadron’s two main emblems:  the Pegasus horse granted to the Squadron on its badge back in 1936 by King Edward VIII and also the crossed Kukri motif which celebrates the Squadron’s long standing association with the 48th Gurkha Infantry Brigade which was forged out in the Far East during the Squadron’s time out there in the 1960s. 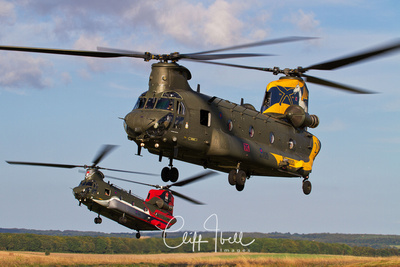 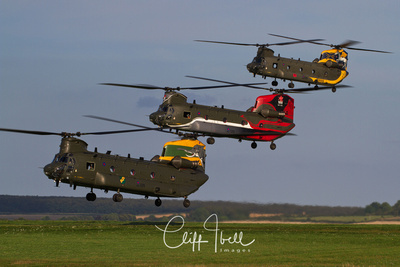 Having learnt valuable lessons from the previous designs, Donovan and Littlejohn decided to use techniques developed on Nellie to apply blocks of colour rather than hand-masking the design on to the airframe. Stencils called ‘sign masks’ were produced from Donovan’s vector art files by RAF Marham graphics bay and transported to Odiham. Using these sign masks allowed much more complex shapes to be applied and saved valuable time in the Odiham paint shop, despite being incredibly challenging to apply well to a riveted airframe.  ZH777 was christened ‘Peggy’ by enthusiasts when it was finally rolled out in April 2016, ready for the centenary celebrations held at the Squadron’s base at RAF Benson.

After the final delivery it was always quietly hoped that the three specials could be brought together as a celebration of both the Squadrons’ achievements and those of the team responsible for creating them. Donovan was made Project Officer for this task and it was originally planned to take place in June 2016 as the 18(B) Squadron airframe ZA712 was due for deep maintenance which would include repainting shortly afterwards. However, due to operational commitments and aircraft unserviceability this proved to be impossible. Fortunately ZA712’s deep maintenance was rescheduled until later in the year, allowing Donovan and his team to attempt it again and a slot was identified in the following September.

The formation training sortie tested the crew’s skills in planning and executing complex setups for the photo serials. As there was a requirement for a camera ship to record this sortie 657 Sqn Army Air Corps, also based at RAF Odiham supplied an AgustaWestland Lynx AH9A (ZG916) for the purpose. This also gave the sortie added value as a dissimilar-type formation which is invaluable training for working together on deployments. 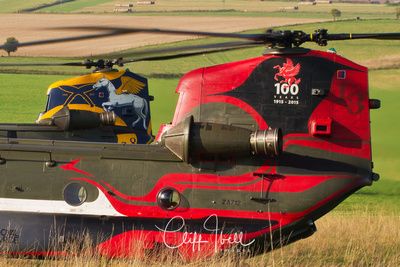 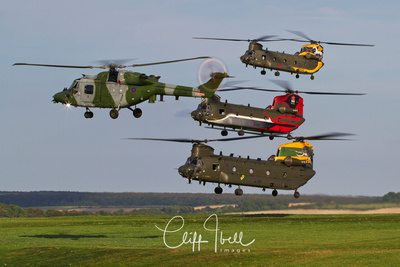 The task put pressure upon the Odiham engineering teams to prepare three specific airframes for this sortie alongside their commitment to provide airframes for imminent deployments which were taking place at the same time. It is huge credit to them that the three specials were prepared for the sortie and all took part without fault.  Talking after the sortie Donovan told me “The engineers have done an awesome job considering the Squadron also sent two aircraft to Sweden today, one to HMS Ocean and another two will go out of the door overseas tomorrow.”

Donovan planned the sortie with numerous formation changes and worked closely with Sgt Dave Rose, head of RAF Odiham’s photographic section, to best exploit the land marks and lighting available along the sortie route. A comprehensive planning document was produced showing the planned positioning of the Chinooks in differing configurations, taking into account the sunlight expected at the time of the sortie. The briefing was then given to the selected crews on the evening prior to sortie and was followed by a walk-through in one of Odiham’s hangers. The process, known as a ‘ROC drill’ was essential so that all the aircrew involved were familiar with the formation positioning required, ensuring that the sortie could be flown efficiently and safely. 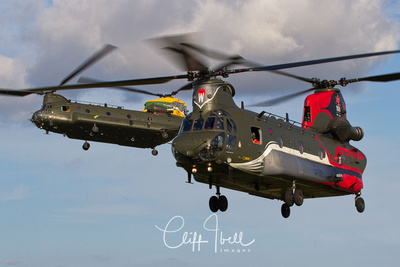 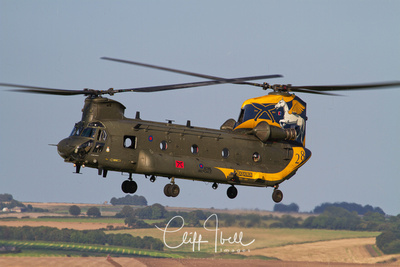 After the formation arrived back at Odiham a thorough debrief took place and Donovan described the atmosphere as “about as ecstatic as professional aircrew allow themselves to be!”  I asked him how it felt sitting in the camera ship seeing his designs flying together and he told me that “When I went to university over a decade ago, never in a million years did I think I would be shooting three Chinooks I'd designed over the top of that very city in weather as good as that all these years later...what an utterly bizarre moment that was.”

Cliff Ibell Images would like to thank both Flt Lt Andy Donovan and the RAF Odiham MCO Flt Lt Nyssa Cole for their help in the preparation of this article.